My grandma gave me yarn

I'm having a blast with my mom and my grandma this weekend. My grandma knits, just like my mom, but she's much less OCD about it. She even gave me some of her yarn!

MY GRANDMA IS COMING!

I am SO excited. My mom says she's flying in tonight. Yup, my grandma is a flying human. That's just one reason she's so awesome. I can't wait!
Posted by Beckett at 10:19 AM 1 comment:

Crafting is so boring

For a while after we moved I was hopeful that my mom might have kicked her obsessive-compulsive crafting habit. There was lots of work to be done with the boxes (I was very helpful and chewed as many of them as I could) and Decorating. Unfortunately, my mom has now devoted an entire room to her crafts. Despite my best efforts to distract her with cuteness, arm pokes, and intestinal gas, she persists in sewing.

Due to my Labrador nature, I am unable to remain disgruntled too long, however. So here's what I do while she's sewing:

Tile floors are so comfortable in this hot climate.
Posted by Beckett at 2:56 PM 2 comments:

Posted by Beckett at 7:50 PM No comments:

My mom is sick today

She says she thinks she ate something that didn't agree with her. Humans and their weak stomachs, I tell you. But she spent all night throwing up so I am taking good care of her today. Lots of naps and snuggling. She says she's starting to feel better so I don't need to take her to the vet.
Posted by Beckett at 2:45 PM 3 comments:

What's up, dog bloggers? My mom and I had a great weekend. I was super helpful while she was putting together lots of shelves. She would be so lost without me. We also went to the pet store (my favorite) where I got my nails ground down (not so much fun, but I did flirt with the pretty girl who did it) and my mom got me a Wubba and a soft Frisbee. I also saw Megan, my beginner obedience teacher, and her snobby Australian Shepherd.

I am a natural at catching the Frisbee, when I want to. To be honest, I'd really rather play with my Wubba. It has such an excellent squeaker. It's so entertaining. I like to play with it when I wake up in the middle of the night, instead of bugging my mom. Isn't that thoughtful of me? SQUEAK SQUEAK SQUEAK!

My mom says my grandma is coming to visit on Friday. Is it the weekend yet? Why do we even have to have a week?
Posted by Beckett at 7:27 PM No comments:

Dad or no Dad

My buddy Stanislaw has an awesome-sounding Dad. I don't have a dad, so I've spent the day coming up with an online profile for my mom so she can get me one... but then, just as I was about to put it up, it occurred to me - wouldn't this new dad be in competition with me for mom's attention? Clearly that will not do.

I hear I have a super chill Grandpa who is a Soft Touch for all animals, though. I can't wait until he comes to visit me. 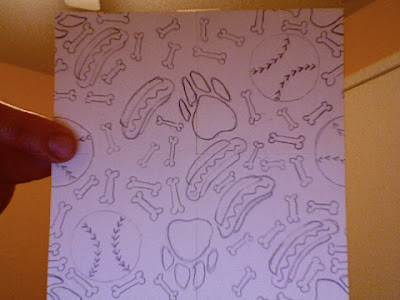 My mom got her Spoonflower invite so I've put her to work designing some fabric for custom bandannas for Moi. I call this one "My Dream Day," which, as you can see, features baseball, Fenway Franks, my autograph in paw prints, and lots and lots of treats. I apologize for the amateurish execution - my mom hasn't taken art lessons. (This sketch looks a little funny because I instructed her to use this method to create a repeat pattern that can be tiled.)

While reading the news today, I came across this story about a dog who inherited $12 million dollars. What interested me was this portion:

It quoted an affidavit from Carl Lekic, the general manager of the Helmsley Sandcastle Hotel, which said $2m would be enough for twice the dog's life expectancy.

Mom, you have been holding out on me. I may be a dog and think of money in terms of pieces of cheese, but I know that you have not been spending anywhere near that much on me. I'm afraid I'm going to request an audit of your finances should the following conditions not be met ASAP:

Ever since we moved to our new den, my mom has been talking about "decorating." She reads lots of magazines (well, only if I don't shred them first) about it. Today, while she was decorating the dining room, I helped out by decorating the bedroom.

As you can see, I moved all my toys from the silly basket my mom had put them in to their rightful place on the bedroom floor.

I'm up late tonight because my mom says she needs to listen to Basket Ball. I don't understand - I've already moved all the balls and toys out of the basket. She's so weird.

My buddy Stanislaw issued a curl up challenge. Now, I like to spread out so I'm not going to enter this contest, but my dog cousins Carrie (short for Sweet Caroline) and Phoebe and my cat cousin Griffen would like to show you their work.

My mom is not a morning person, so I usually start extra early to get her up and about in plenty of time for her to go to "work" (whatever that is). But this morning I tried a new strategy. I woke her up at the usual very early time, but instead of continuing to bark, I invited myself into the human sleeping crate and snuggled up to her. This was very cozy so I decided that maybe getting Mom up on time is not so important. What she didn't realize (since I've been so helpful getting her up before her alarm clock goes off) is that the volume on the alarm clock was turned way down, so when it went off it was very, very quiet. Quieter than a snoring Labrador, in fact.

Wouldn't you know, the first thing she said when she realized she'd overslept by almost 45 minutes was, "Beckett, why didn't you wake me up?" Humans - so fickle.

Posted by Beckett at 8:44 AM No comments:

My mom says I have champagne tastes, but we're on a beer budget. Since I have a rather extensive list of items and renovations I would like to take place (I really need a motorcycle with a sidecar for me to ride in, plus I would like my mom to install a river, a lake, and an ocean in the back yard so I can have my choice of places to take a dip), I have decided to take my mom's advice and get a J-O-B.

I thought I would be a natural supermodel, since I am so handsome, and yesterday I got my mom to do a photo shoot for me.

Here is my happy face:

Here is my serious face:

Here is my inquisitive face:

I'm pretty sure that I'll be booking shows in no time, and the pieces of cheese will start rolling in.

No rules at the new house!

The new house is a lot of fun. In addition to my yard, I also have a whole new neighborhood of things to sniff. There are lots of other dogs so checking my p-mail takes a while.

But my favorite thing about the new house is that there are no rules. In the apartment, I wasn't allowed to jump up and grab things off the kitchen counters. But now those counters aren't here, so I figure the new kitchen counters are fair game. It's so liberating! Unfortunately I think my mom is figuring out my reasoning, so I expect rules will return soon.

I was hoping this moving thing would involve cows, so it was somewhat disappointing to find out that it only involved the boxes that my mom had been piling all around the apartment. Anyway, on Saturday, I went to the new house and then a few hours later my mom showed up with a bunch of people who had come to visit me. But instead of letting them play with and admire me, my mom had them carry boxes and boxes of stuff into the new house. How rude!

I could see that they needed some supervision to properly unload the truck, so I quickly found a way out of the backyard. Unfortunately, someone tattled on me right away so I had to go into my crate for a while. How rude!

While the new house is very exciting with all of its rooms and my backyard, it's still a little strange. I was happy to see that my mom started to set things up right away. I sniffed at the human sleeping crate for a long time to make sure it was the same one. Sometimes the new house seems a bit overwhelming so then I go hang out in my crate for a few minutes, but I am getting used to things.

The backyard is pretty cool, even though my mom used the Hose Beast to give me a B-A-T-H. She also put a chain on the gate so I can't get out and patrol the front yard. She's such a buzzkill!

Posted by Beckett at 9:20 AM No comments: