Mom thought she'd left me at home when she went to the parades yesterday, so I had a little explaining to do when she saw this picture: 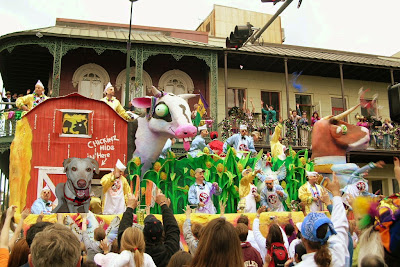 I think she's just jealous because I came home with more throws that she did.
Posted by Beckett at 10:29 AM 7 comments:

Anyway, here in the home of America's first Mardi Gras (yes, before New Orleans) celebrations are in full swing for Fat Tuesday.

Happy Mardi Paws!!! I'm hoping Mom will share her pancakes with me tonight!
Posted by Beckett at 9:43 AM 2 comments:

Sorry I haven't been posting lately. I've been busy providing TLC (Tender Labrador Care) to my mom as she recovers from her illness.

Valentine's Day was my mom's burpday. To celebrate, she got me a Merrick Sarge bone.

We got this awesome Honest Weblog award from Big Pupi and Stanislaw. They think my blog is brilliant! Thank you so so much. We are crazy excited.

The rules:"When accepting this auspicious award, you must write a post bragging about it, including the name of the misguided soul who thinks you deserve such acclaim, and link back to said person so everyone knows he or she is real.

Choose a minimum of 7 blogs that you find brilliant in content or design. Or improvise by including bloggers who have no idea who you are because you don’t have 7 friends. Show the 7 random victims’ names and links and leave a harassing comment informing them that they were prized with “Honest Weblog.” Well, there’s no prize, but they can keep the nifty icon. List at least ten honest things about yourself. Then, pass it on!"

1) My full name is Joshua Patrick Beckett Wilson, after Joshua Patrick Beckett, pitcher for the best team in baseball, the Boston Red Sox. The reason I am named after Josh Beckett is that before I adopted my mom, she had a dream that she'd gotten her dog and taken it to the vet for the first time, where they asked her what the dog's name was, and she said, "Josh Beckett." When she woke up, she was a bit confused, but here's where it gets creepy - about a year earlier, she'd had a dream that the human Josh Beckett would win 21 games, the Cy Young, and the Red Sox would win the World Series. Well, 2/3 ain't bad. She was afraid that if she ignored the name in the dream she would be jinxing her beloved Sox, but she just couldn't see calling a dog Josh. A friend (another Sox fan) pointed out that Beckett would be a great name, and so that is my everyday name.

2) Ironically, because my mom is a librarian, people assume I am named after Samuel Beckett. Occasionally people also think it's after St. Thomas Becket.

3) Some of the things my mom says to me on a regular basis are "Get down," "Drop it," and "Honestly, MUST you put EVERYTHING in your mouth?!?" Um, duh?

4) I am an unrepentent counter surfer. I learned not to snitch things off the counter when we lived in the apartment but ever since we've been in the house I have just refused to stop. I'm pretty stealthy about it too... but I have a tendency to let out a telltale toot just as my paws reach the counter.

5) I seem to have acquired a girlfriend. There's this dog who my mom has decided to call Reagan, because the house we think she lives at has a fence but Reagan was all "Tear down this fence!" and a section of it came down and she pretty much roams around wherever she wants. So whenever we go on our regular walk route she comes out and shows me her belly and we sniff around and play, and then she follows us all the way back to our house. My mom is not amused about this. Reagan seems to be in good health and fed on a regular basis, but she doesn't have a collar and we're not totally sure which house is hers. Mom is not sure what to do about this because she's worried that she wanders so much she could get hit by a car or something.

6) When my mom was in the hospital a few weeks ago, some people named Father Ray and Nancy came and took me to their house and I stayed with them and their chocolate lab, Willie Wonka, and cat, Buster. Mom says Father Ray is her priest. I had met him before because he's the one who blessed me at the Blessing of the Animals. Anyway, I thought it would be super fun to play play play with Willie but apparently Willie is a bit of a grouch who is set in his routine. One morning he was like, "Hey Beckett, let's play outside." Naturally, I was excited and followed him outside and what did Willie do but immediately turn around, go inside, and CLOSE THE DOOR on me! I missed my mom a lot the whole time I was there but Ray and Nancy paid lots of attention to me and took really good care of me, but I sure am glad my mom is back (and BTW she is feeling a whole lot better every day).

7) My mom says I have two settings: exuberant and asleep. But the truth is that I'm even exuberant in my sleep. I have lots of active dreams and my paws are always twitching, my nose is always sniffing, and I even bark and whine in my sleep.

8) For some reason, my mom likes to have four pillows on her full-size bed. This is wrong and evil and every chance I get I will destroy the two excess pillows. Lately I have taken to lulling the extra pillows into a false sense of security, and then pouncing when they least expect it.

9) I HATE the Furminator.

10) I love going to the V-E-T. Everyone there is so nice and friendly and I love to flirt with all the pretty vet techs and play with the resident cat, Simon. Sometimes they stick me in places that they really shouldn't but I forgive them in about 0.05 seconds and go back to flirting.

And now to tag people - since this blog has been suffering from Neglected Blog Syndrome, I suspect most of my furends have already been tagged. If this is a duplicate, my apologies.

Human Place of Tile and Steel

Sorry for the unexpected blogging hiatus, folks. My mom has been unwell and even had to go to the hospital for a few days. I think that's like the V-E-T for the hoomans. She's going to be pretty busy recovering for a while but wanted to check in and let you know that we are thinking of all our DWB friends and will be back to blogging as soon as we can. And don't worry, I am giving mom lots of TLC (Tender Labrador Care) and she will be right as rain soon.
Posted by Beckett at 8:26 AM 6 comments: