Quick post today - my mom is home with bronchitis so I need to provide TLC (Tender Labrador Care) so she'll get well soon.

However, I just wanted to reassure all the Red Sox fans who read my blog that I am ready and willing to fill in for my namesake:

So there will be a Beckett on the mound in game three, no worries.
Posted by Beckett at 5:05 PM 5 comments:

As I mentioned yesterday, Phoebe was very lonely after Caleb went to the Rainbow Bridge, so Carrie joined the family.

Carrie's first family left her and her brother Dexter chained up in their backyard when they moved out of the country. After a few days, someone came to take them to the shelter. Dexter got adopted quickly, but Carrie was at the shelter for over six months.

Her name used to be Charisma, and while she has lots of charisma, it just didn't seem like her name. So she became Carrie (short for Sweet Caroline, which I'm sure the Red Sox fans among you know as the song that's played at Fenway Park in the 8th inning of every game).

Carrie is skittish around new people, especially men, but once she warms up to you she will love you forever. She adores her big sister Phoebe. She is very happy to have a happy forever home.

She can make herself very tiny:

She loves to play with Phoebe:

And is especially fond of treats!

Posted by Beckett at 9:09 AM No comments:

This is not me!

Yesterday, my mom was flooded with emails asking if this is me:

It is not! I have a pink nose, not a black one - just like the lovely Sophie Brador. But I do like to leave my tongue lolling out the side of my mouth like this:

Anyway, that is Cooper, not me. His mom commented on the picture: "I’m Cooper’s mom and this was his graduation party from puppy school. The party hat didn’t go over so well..." I think we are kindred spirits.

Way to go, Cooper!
Posted by Beckett at 8:58 AM No comments:

Yesterday, Mom took the blog to tell you about Caleb. Today, you'll get to meet my cousin Phoebe!

Mom was on a long road trip in the summer of 1997 when she met a hippie family with a large number of puppies. One of these puppies was Phoebe, who kept following my mom back to her car. Mom returned her to the hippies twice and was told that she could keep the puppy, but it took Phoebe following her to the car the third time for her to get the message.

When Phoebe was a puppy, her ears were too big for her to hold them up straight. This is probably a good thing, since Mom might had named her Yoda if she'd seen them that way. Instead, she named her after Phoebe Caulfield, the younger sister in the The Catcher in the Rye.

Phoebe is 11 years old now, but still has puppy-like energy and absolutely no trouble getting around.

Phoebe loved her big brother Caleb very much. She would try to herd him around the back yard.

Phoebe has magical self-cleaning properties. Here's a picture and email Grandma sent to my mom:

This evening Phoebe got an urgent message to dig in the patio garden. She dug so diligently that her snoot was dark brown. I needed a picture of this, but by the time I had found the camera and put in a disk, half of the dirt was gone. She hadn't been pawing at it--it just left. I had often wondered why she never needs a bath (except for a few times that we won't mention), but now I know. The dirt just flies off into the air.

She was very lonely after Caleb went to the Rainbow Bridge, so that's when Carrie came into the picture:

But that's a story for another day.
Posted by Beckett at 11:18 AM 3 comments:

My mom was inspired by Big Pupi's photo tribute and decided to take the blog today to tell you about Caleb.

Here's a picture of Caleb as a tiny, 10lb. puppy on the day he came home with us. He slept in my lap on the drive home.

He was the runt of the litter but as you can see he had big paws.

He grew into a very handsome, very large Labrador.

He had a knack for finding the comfiest places to rest.

He was an excellent gardener and always added his touch to my mom's gardens.

He was a little bit spoiled.

He also had to put up with an annoying little sister, Phoebe. But he really loved her, even though she was a pest.

He also loved his pool.

As he got older, he developed arthritis and it was hard for him to move around too much, so he spent a lot of time relaxing on the futon in the study. My dad would get up early to watch TV with him. Caleb was a big fan of Law & Order and Crossing Jordan.

First of all, I'd like to welcome Sherman to the dog blogosphere. Sherman and I share a taste for the finer things in life, like cell phones and books. Yum!

Secondly, I would like to send lots of pawsitive thoughts and healing vibes to the lovely Sophie Brador. I have only recently discovered her blog and let me tell you, I am in love!

My mom took yesterday off "Work" so we had a long weekend. It was excellent. I offered my decorating expertise as she worked to get the living room looking a little less bare.

Mom covered some canvases with pretty batik fabric and put them up above my couch:

But here's the other wall, with lots of art on it. It's nice and all, but isn't something missing? SomeONE?

Also, something my mom wrote is up on McSweeney's - look for the remembrance by Ellen Wilson. I make a cameo... although I'm not sure I like that line about my "gassy slumber."
Posted by Beckett at 11:04 AM 3 comments:

Snapshots of a Sunday

Posted by Beckett at 8:40 PM No comments:

My mom says she's been really "busy" at the thing called Work, so she hasn't gotten around to helping me update my blog. Boo. But she does have a couple of videos of me to tide you over until she's not "busy" any more.

Here's a video of my mom tormenting me with pizza:


And here is some footage of my thorough work destroying my loofa dog: 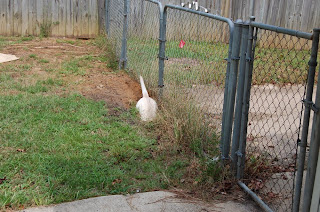 A moment of silence...

Look what came for me!

Make every day a Sunday!

My favorite day of the week is Sunday. Now, as a dog, my daily schedule doesn't change that much, but since my mom has to go to something called Work to support me in the lifestyle to which I've become accustomed, hers does. That's why my favorite day is Sunday.

On Sundays, I still wake mom up at 6 am to politely request my breakfast. About 6:45 I wake her up again to politely request to be let out in the back yard. This is pretty much the same as every other day. But instead of leaving for work about 7:40, my mom hangs out with me until about 9:45, when I get in my crate for sleepies and she goes out to someplace called Church. She comes home a few hours later and that's when the real fun begins. First, I beg for some of her lunch. Then, we take a nap and I'm allowed up on the human sleeping crate with her! We turn on the radio and listen to baseball and snoozel. It's fabulous. After naptime, we go for a nice walk, then I have dinner, then help my mom cook her dinner. Unfortunately, this is usually the point in the day where she gets the Loud Sucking Machine out and undoes all the great shedding work I have done all over the house. I guess it can't be a perfect day. But it's pretty close.

I'm not much good at alibis.

I think I'd better stick to trying to make Mom laugh to divert her from mischief.

Riding out the storm

Hurricane Gustav hit to the west of my den, but we still had tropical storm-like conditions. I used the time hunkered down at home to get some rest.

I call this photo "Ode to Stanislaw":