OMDOG I AM SO BORED!

That MOM says I am doing GREAT at staying calm but that is because she won't let me have any FUN. Anyway, that MOM says she is relieved to be through the first 10 days of this and that she thinks we will both make it through with her sanity remaining somewhat intact. OMDOG like her sanity was ever there! LOL!
Posted by Beckett at 5:50 PM 8 comments:

I'm on house arrest and it STINKS. See, even though MOM has given me heartworm preventative every month since I adopterated her, I managed to test positive for adult worms. So Thursday I had to go to the V-E-T and get a SHOT and now I have to be calm for a month when they will give me another shot and then I will have to be calm again for another month.

Also, since that scary seize-her incident a few weeks back I have been taking anti-seize-her medicines. They make me really thirsty so I have to go outside to pee about every 5 minutes. So now instead of getting some PRIVACY while I do that, MOM puts me on a leash and takes me out into MY yard and hovers over me.

I also had another seize-her at the V-E-T so everything is still very stressful and mysterious for my mom but she is hanging in there. Don't worry, I'll take good care of her. 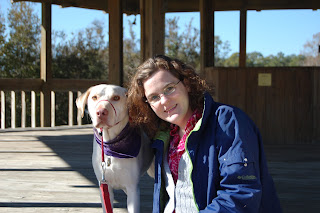 Hey Mister, Throw Me Something! 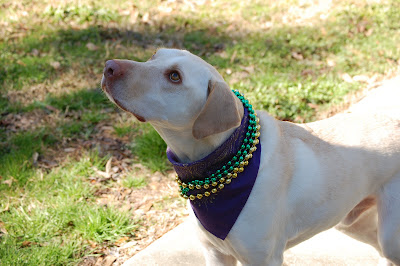 Today is that Mom's burpday! She says if she were a hobbit she would be coming of age today, but fortunately since she's just a regular hoomin she doesn't have too. (She does have more than a passing resemblance to that PIPPIN from Lord of the Rings, so maybe she's PART hobbit?!? Pass the ent water, please.)

I have MANY sweethearts - that MOM, of course, and my main squeeze, MONICA, and all my vet techs, and my newest love, AUNTIE ALISON, who came to Babablama all the way from Bawlmer, Merryland (with all the snows!)

This is MOM and ALISON back when they were in grad school together:

Today is also Joe Cain Day here in Mobile, which is part of Mardi Paws. Woohoo! HEY MISTER THROW ME SOMETHING!

(Khyra asked if she would get beads for showing her pantyloons. Here in Mobile, Mardi Paws is more family-friendly than in New Orleans, so the best way to get lots of throws is to be a cute human pup - although I bet being a cute pup would work too.)

I have been looking at the snOHMYDOG! pictures of my mid-Atlantic furrends. My dog cousins Phoebe and Carrie in the mythical land of New Jersey are enjoying their fluffy white stuff, and I admit I am a little jealous.

But down here in the land of Mobile, Babablama, Mardi Paws is in full swing. (Technically, it's Carnival season, but around here the whole season, not just Fat Tuesday, is referred to as Mardi Paws.) Many of you probably associate Mardi Paws with New Orleans, but in fact Mobile has been celebrating Mardi Paws since 1703. If you are interested in learning more about Mardi Paws in Mobile, there is an interesting documentary called The Order of Myths.

During this time of year there are lots of parades and balls. (Mom says that the balls are actually big parties, not balls that you can chase.) The day of Mardi Paws itself, lots of people (even my mom) have the day off work. Mom, who is not from here, has always called that day Shrove Tuesday or Pancake Day, and has celebrated by going to eat pancakes at church, but since she moved here she has had to make her own pancakes at home before going downtown to the parades.

This year is extra special because those New Orleans SAINTS are in the SUPER BOWL during MARDI PAWS! The Saints are the closest NFL team to Mobile, and there are a lot of people from New Orleans who now live in Mobile (especially after Katrina), so all around town you can see the fleur de lis and signs that say GEAUX SAINTS or WHO DAT? Woohoo GEAUX SAINTS!

So we don't have any fluffy white stuff that falls from the skies, but you do have to watch out for falling "throws" - beads, cups, coins, stuffed animals, candy, and Moon Pies!
Posted by Beckett at 10:48 AM 7 comments:

I thought that PLAN of mine was quite brilliant but a bunch of you disagree. I started to question it when not one but nine Sibes AND Dennis the Vizsla voiced their concerns. I don't want to upset my mom any more so I am going to try not to have any more weird seize-her episodes.

I met mom at the door when she came home to let her know. She was a bit surprised because when she left I was in my crate... and even more surprised when she looked at the crate and saw it was still latched! A magician never tells his secrets!
Posted by Beckett at 9:19 PM 9 comments:

You guys all know that I love to go to the V-E-T. There are so many pretty vet techs to flirt with, a lot of interesting smells, and lots of attention for ME. Well, I was looking in the phone book the other day and realized just how many V-E-Ts there are in this town - and I had been to hardly ANY of them.

Sure, I go see my buddies at my regular vet at least twice a year, plus a few more times for boarding. And I did have that big adventure to the animal ER back in July. Oh, and I got to visit my V-E-T's father, who is also a V-E-T, that Saturday a few months back when I ate a whole bottle of fish oil capsules. But still! Imagine how many vet techs I have not yet flirted with!

Clearly, I needed to come up with a plan. So last Thursday evening, while Mom was vacuuming, I decided to go into convulsions. It worked! Mom scooped me up and took me to the car and went zooming out of our subdivision and across the street to another V-E-T, who is open until midnight. And they gave me lots of attention and some neurological tests and x-rays and stole some of my blood. They said that it didn't seem like I'd gotten into something toxic (my bloods were pretty much normal) and I wasn't showing any signs of having inflammation around my brain, but to be safe they treated me for both, keeping me overnight to give me fluids before sending me home with some steroids.

OMDOG it was such an adventure and I had so much fun but my Mom was maybe not having so much fun?!? And she has been talking on the phone lots with both V-E-Ts and they have been saying stuff about maybe a seize-her disorder?!? I don't know what that is about but I do know that MOM has said I am not ALLOWED to have any more emergencies and that she is onto my PLAN and I am going to have to get a J-O-B to start paying these BILLS. Sheesh, she is just no FUN!
Posted by Beckett at 7:09 PM 10 comments: